The varnish formation process in mineral oils and Phosphate Esters is reversible.

We have solution to treat the contamination in Phosphate Ester type turbine fluids. You will no longer need to worry about varnish formation caused by hydrolysis, thermal degradation and oxidation.

Hy-Pro is an American company manufacturing innovative solutions for the treatment of hydraulic fluids and lubricants for more than 30 years.
ID System Fluid, partner of Hy-Pro In France, is the Fluid Cleanliness specialist and your local contact.

We propose you discover our approach and treatment processes to remove soluble and insoluble contamination in these fluids.

Phosphate Ester fluids are used for:

Problems relating to the use of these fluids are regularly observed. The causes and solutions are often the same from one site to another:

Hy-Pro already equips more than 1,000 installations (turbines and compressors) throughout the world and provide their expertise.

Varnish is a thin, hard, shiny, oil insoluble deposit and is mainly composed of organic residues. Its colour may vary, but it usually appears in shades of grey, brown or amber.

The formation of gels is complex since it involves several Phosphate Ester degradation phenomena: oxidation, thermal degradation and hydrolysis. If they are not controlled, these 3 phenomena are self-sustaining and sometimes even amplified by the adoption of poor solutions (Fuller Earth, conventional resins).

Let’s analyse the effects of these 3 phenomena:

Therefore, a global treatment is required to overcome the formation of these varnishes.

The heat and the presence of metal, and to a lesser extent oxygen, are inherent in systems and cannot be avoided. The metal particles, electric discharge phenomena and water remain: Hy-Pro/ID System Fluid provide a global solution for each of these issues:

Focus on the formation of varnish by oxidation:
In normal operating conditions, turbine lubricants are subject to oxidation which produces polar molecules. Thanks to their additives (phenols and amines), lubricants are able to maintain oxidation products in a soluble form.
A high quality lubricant like most Phosphate Esters such as Fyrquel® *, Fyrquel® EHC * and Fyrquel® EHC Plus * (class ISO HFDR) have a high capacity to dissolve these contaminants, preventing the formation of varnish deposits. But as oil degradation and oxidation products accumulate, the solvency of the fluid decreases.

Above the saturation point, the fluid can no longer dissolve varnish precursors formed by oxidation, the varnish will start to precipitate, become insoluble and will be deposited on the metallic walls. The temperature will have a direct impact on this solubility, varnishes will tend to form in cold areas. Likewise, due to their polarity, varnishes prefer to stick to metal and as such, form hard and potentially harmful deposits (tank and servo-valves).

But, without removing the dissolved contamination which returns to the system to form new gels again. The treatment is not complete.

The systems to remove soluble varnish (SVR™) and the associated ICB™ resins are able to remove dissolved contamination.

These specialised ICB™ ion loaded resins which contain millions of polar bonds are capable of adsorbing the varnish which is still in a soluble form. This adsorption is based on a preferential molecular interaction between the polar varnish molecules and the polar bonds present in the resin.

Conventional ion exchange resins work by exchanging a chemical product with another one, generating new contaminations. The ICB™ resins are designed to adsorb all contaminants with creating other products.

Another key advantage of ICB™ resins: the harmful oxidation products can be removed at any operating temperature, which means that SVR™ + ICB™ systems can be used continuously. The continuous removal of soluble varnish and its precursors ensures that degradation products do not accumulate in the lubricant, eliminating the risk of varnish formation during normal cycles and turbine shutdown cycles.

The physical changes that have resulted in the formation of insoluble varnish particles and deposits are reversible.
The renewed solvency of the lubricant forces the insoluble varnish already on the turbine surfaces (hydraulic components, tank, servo-valves) back into the soluble form which can be adsorbed then removed.

Since the presence of soluble particles cannot be measured using traditional techniques, we conduct very specific analysis which allows us to carry out an overall assessment and choose the necessary and best treatment method.

Several systems exist depending on the size and local constraints. These systems always combine ICB™ resins and VTM™ filter elements. Treatment conditions are of vital importance and will be precisely defined by Hy-Pro/ID System

3) For the removal of water, there are 2 techniques:

Carbon particles cause the dark colour of the fluid and the micro-diesel phenomena. It is the ECR system (Electrostatic Contamination Removal Systems).

Finally, if the electric discharge phenomena appears (under-sizing of filters, passage rate too high, low filtration surface), HyPro “NoSpark” filter elements can be installed. They avoid the formation of static electricity and electric discharges. The installation of a better sized offline filtration system is also a solution.

Phosphate Ester type fluids have many advantages, but treatment solutions are not always appropriate.

Hy-Pro/ID System provides a global treatment solution allowing you to overcome the problems of contamination and degradation of Phosphate Ester fluids to make the most of your installations.

* Fyrquel® products are a registered trademark of ICL 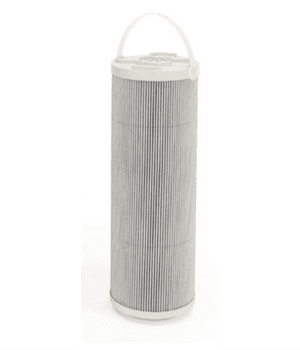 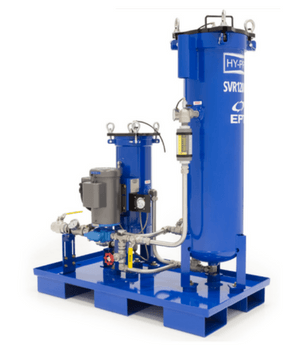 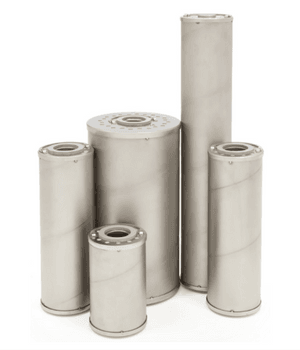 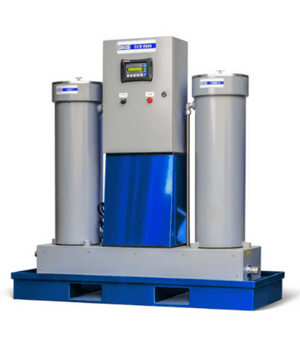 on one of our products

We deliver our best filtration equipment